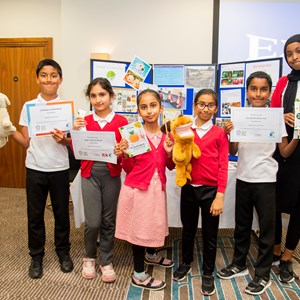 EIGHT local primary schools have taken part in a competition to find the ‘eco factor’ in a celebration event held at City Hall in Leicester.

The Eco-Schools/Food for Life event, held last week, involved pupils from school councils, environmental clubs and school nutritional action groups sharing their work and finding out what other schools have been doing to save energy, to promote local wildlife and to encourage social justice.

Pupils and staff set up stalls showcasing their work in the morning, before presenting their projects to a panel of judges who visited each stall.

The competition showcased projects focusing on energy saving, biodiversity, global citizenship, litter picking and the future of travel. The event was supported by Sustrans which showcased its project ‘travel to a sustainable future’. Students were also given the opportunity to play the recently launched climate change arcade game by the councils museums and arts service.

The Food for Life award was presented to Merrydale Infant School, for its dedication to improve food quality in school.

Finally the eco-factor award, which was chosen by the students, was awarded to Knighton Mead Primary Academy for its excellent whole school approach.

Leicester deputy city mayor for environment and transportation, Cllr Adam Clarke, said: “With the climate emergency focusing attention on the need to respond globally, it’s encouraging to see so many young people coming up with such innovative ideas and projects to live more responsibly.

“As a council we are committed to improving air quality in the city, cutting emissions and reducing our carbon footprint, and it’s great to see schools supporting us in that aim.”

Extending the city’s Eco-Schools programme is one of the actions resulting from the first Leicester Climate Emergency Strategy. The strategy sets out an ambitious vision for how the city needs to change to move towards becoming carbon-neutral and adapting to the effects of global heating by 2030, or sooner.