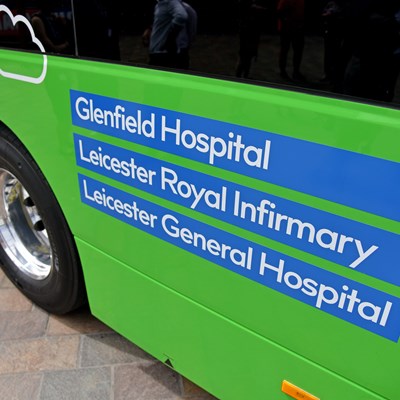 The Hospital Hopper service is having a complete upgrade, including replacing the current diesel vehicles with a fleet of fully electric buses, with features such as free USB chargers, passenger information screens and a new eye-catching livery.

The electric bus service is being launched in partnership with the University Hospitals of Leicester NHS Trust (UHL), and bus operator Centrebus.

It is part of the Leicester Buses Partnership - an ambitious bus partnership programme of work between Leicester City Council and all local bus operators to improve services, routes and vehicles across the city. The new Hospital Hoppers will become part of the new Greenlines electric bus network, which already serves all three Park and Ride sites in the city.

The new electric Hospital Hopper buses were launched at Leicester’s Jubilee Square on Thursday, June 23, and will come into operation on Monday, June 27.

The service will continue to run half-hourly between Hamilton and Beaumont Leys via Leicester General Hospital, Leicester Royal Infirmary, the city centre and Glenfield Hospital.

There will also be new bus shelters together with real-time information displays at all stops, and in due course will use a new bus lane being installed along Groby Road .

Each accessible bus stop will also have a “text-to-speech” facility giving audible bus arrival times for passengers with visual difficulties. There will also be next-stop announcements onboard the new buses.

As well as helping to meet the city’s climate emergency goals to reduce emissions, boost air quality and tackle traffic congestion, the new electric service will also help UHL on its journey towards net-zero carbon emissions.

The electric buses and other associated new features for the UHL-funded Hospital Hopper service have been financed by the council’s successful Transforming Cities Fund bid made to central government.

Leicester deputy city mayor for transport and the environment, Cllr Adam Clarke, said: “The launch of these new fully electric buses is another big step forward in improving public transport in the city, while also striving to meet the demands of tackling our climate emergency.

“Passengers will be able to take advantage of free USB chargers, new and improved service information panels and a quieter, more pleasant journey.

“Creating and expanding upon this Greenlines network over the next eight years will make a huge improvement to the city’s air quality, cutting emissions and making high-quality public transport accessible to all.”

Electric buses reduce carbon dioxide emissions by 34 percent, and don’t emit any particulates or nitrogen dioxide. The overall improvements are designed to make the service more attractive to users, encouraging more people to choose them over car travel. The measures are vital both for the local environment and Leicester's move toward Net Zero.

The Leicester Buses Partnership also aims to introduce a network of 30 frequent, reliable, affordable and easy to use electric bus routes over the next eight years.

At the launch of the electric Hospital Hoppers, Leicester’s Hospitals chief executive, Richard Mitchell, said: “The new Hospital Hoppers are a great opportunity to work with partners, to reduce our carbon footprint and to make it easier for people to access health care in Leicester. I look forward to using the Hoppers myself.”

“Passengers will be able to make use of enhanced features such as USB charging ports, digital information screens and next stop announcements. We’re proud to have worked in partnership with the city council and the hospital trust to deliver this project and we look forward to further electrification of our fleet later this year.”

More details are available on www.leicesterbuses.co.uk