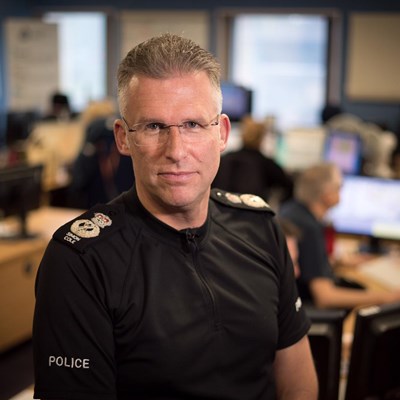 Before retiring earlier this month, Simon Cole had been Leicestershire’s Chief Constable for 12 years – and Sir Peter worked closely with him during that time.

“Anyone who met Simon couldn’t help but be enormously impressed,” he said.

“He was entirely committed to good policing, to the communities of Leicester and Leicestershire, but above all to helping people – that came over in everything he did and said.

“He was not only a very effective police officer – he was also a truly lovely man who was proud to serve the people in an area he lived in and loved.

“As a local lad, he knew Leicester and Leicestershire well and recognised the strength of Leicester’s diversity. He respected all of the city’s many communities, he valued them, he got to know them – and this commitment to furthering cohesion between communities will be a key part of his legacy.

“The hundreds of tributes that have been paid to him show just how much he was loved and respected, both by his colleagues and by those he met in the course of his work. But he wasn’t just a nice guy, he was also a tough cop – and that’s an astonishing combination of characteristics.

“He was Chief Constable for a record 12 years – and only served for so long because he was so good. He set high standards and lived by them, creating a police force he was rightly proud of.

“Simon was an all-round good person and will be very, very sadly missed. I will look back with gratitude for what he achieved, but deeply regret that he’s no longer with us, when he had so much more to give.”