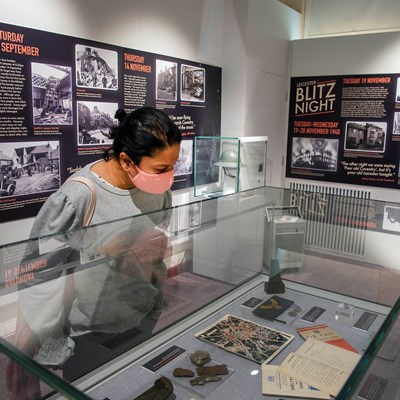 AN EXHIBITION created to mark the 80th anniversary of the ‘Leicester Blitz’ returns to the city’s Newarke Houses Museum this weekend.

The exhibition – which opens on Saturday 5 March – documents that night in detail, through objects, pictures, paintings and personal stories of the damage that was done.

It also shows how Leicester prepared for all the other air raids and explains what happened on those dreadful nights, often in the words of those who were there.

Many of the items on display – including rare uniform and paper artefacts used by the city’s Air Raid Precautions (ARP) services – have been loaned to Leicester Museums & Galleries by local historian Austin J. Ruddy.

“Documentaries largely portray the Second World War as a conflict fought in far flung places that often require a map to locate, but one of the most important episodes took place right here on our city streets,” said Mr Ruddy.

“This was an uneven conflict between the military might of Luftwaffe bombers and unarmed civilians. But, ultimately, the people of Leicester won this battle, blunting the Luftwaffe’s bombing through community effort and the dedication of altruistic ARP workers – albeit at a hard cost.

“The exhibition reveals the extraordinary heroism of the ARP and other emergency services, whose remarkable stories had largely been forgotten for over 70 years. Many worthy deeds shine through the darkness of the Blitz and deserve to be told – and they are in this poignant exhibition.”

Deputy city mayor for culture, leisure and sport Cllr Piara Singh Clair said: “More than 80 years ago, this city faced the bombs of the Luftwaffe, with dozens of people losing their lives and many more losing their homes and their livelihoods.

“Today, the people of Ukraine are bravely resisting the might of the Russian military. The horrors of war have sadly not gone away.

“This exhibition reminds us to learn from history and to think of those who suffered in Leicester in 1940 – but as we remember them, our thoughts will also be with our brothers and sisters in Ukraine.”

The exhibition was due to open on the 80th anniversary of the raid in November 2020, but had to be postponed due to COVID restrictions. It finally had a brief two-week run at Newarke Houses last summer.

The Leicester Blitz – the German Air Raid on Leicester, 19-20 November 1940 opens at Newarke Houses Museum on 5 March and continues until 15 May.

Read more stories on this subject, and find out how to share your memories of the Blitz, here.

More information about the exhibition is available here