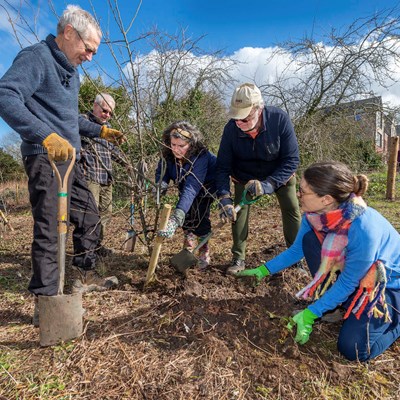 VOLUNTEERS have joined their local councillor and parks staff to plant dozens of small fruit trees on a site that was used as allotments until the 1990s.

While half of the former St Mary’s allotment site has now been developed for housing, the other half has been preserved by the city council as a nature haven and new public open space.

On Saturday (12 March), conservation volunteers and members of the Friends of St Mary’s helped to plant 25 assorted fruit trees, with many of them grown from cuttings from trees that once stood on the site off Aylestone Road in Leicester.

Existing wildlife habitats have been enhanced though the addition of bat and bird boxes, while the site has been deliberately left as a natural space to protect the established ecology.

Assistant city mayor and Saffron ward councillor Elly Cutkelvin said: “This enhanced nature haven and new open space is the result of a long partnership between the city council and a committed group of local conservationists.

“With half of the original derelict allotment site allocated for much-needed new housing, we worked hard to ensure that the remaining land was retained for community use, and that the biodiversity and integrity of the site was preserved.

“While keeping the site as natural as possible for wildlife, we’ve also tried to get the balance right in making the space more family-friendly.

“I hope that the improved access and new play area will encourage more people to enjoy St Mary’s Open Space.”

Chris Garner from The Friends of St Mary’s said: “The addition of fruit trees in the community orchard and the new bird and bat boxes should help nature to thrive, along with the support of not only local residents but also the city council.”

The £500,000 scheme to create a new public space on the site has been funded in full by developer contributions as part of a section 106 agreement linked to the neighbouring housing scheme.

Access to St Mary’s Open Space is via a path from Aylestone Road, opposite the old Gas cottages, or via the new housing development on Maris Lane.