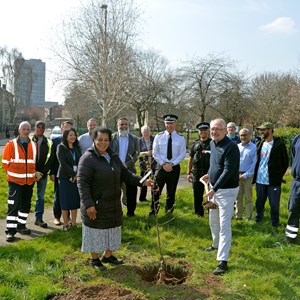 NEW trees have been planted in locations across a city neighbourhood as part of commemorations for the Queen’s Platinum Jubilee.

The 11 trees, including varieties of hawthorn, cherry and birch, were put in place in a joint scheme involving the local Tenants and Residents Association and Leicester City Council.

The work was carried out to replace trees which have been cut back or removed as part of recent neighbourhood improvement work in St Matthews, such as sprucing up communal courtyards, closing down unsafe alleyways, installing new streetlighting and railings and clearing away several old garages and bin stores.

It also ties in with the national Queen’s Green Canopy initiative, to get communities across the UK to plant trees to mark the monarch’s record-breaking 70 years on the throne.

Peter Soulsby said: “We were approached by the Tenants and Residents Association about putting in several trees across the community, both to replace those which had to be removed as part of the recent work to spruce up the area, and as part of wider commemorations for the Queen’s Platinum Jubilee.

“The mixture of small trees will be maintained by our parks staff, and will hopefully add to the street scene of St Matthews for many years to come.”

St Matthews Tenants and Residents Association chair Jean Williams MBE added: “In St Matthews, we have had a long association with the royal family. Prince Phillip opened the Medical Centre on St Matthews and now with Queen’s Jubilee, what better way to celebrate than with this planting.

"In St Matthews we have seen many positive changes – thanks to many volunteers and stakeholders who have played a key role in our success.

"This tree planting was also to celebrate all the hard work people have put in to make St Matthews a better place to live."