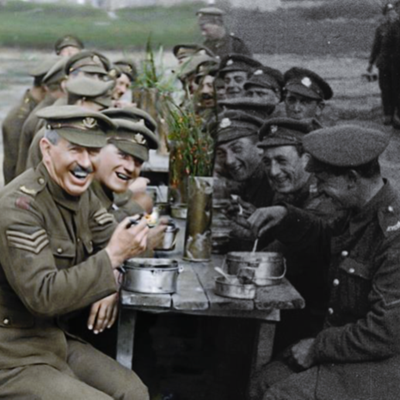 LEICESTER has been chosen as one of five UK cities to feature in a prestigious commemorative project reflecting on conflict since the end of the First World War. Leicester Museums and Galleries is part of the IWM 14-18 NOW Legacy Fund, a national programme of 22 artist commissions inspired by the heritage of conflict and created in partnership with Imperial War Museums and 14-18 NOW, the official UK arts programme for the First World War centenary.

The city’s museums have been awarded £250,000 from the Imperial War Museums’ project which involves a series of world-renowned artists working with local partners to create specially-commissioned artworks to commemorate the heritage of conflict.

Leicester’s commission will commemorate its role as a City of Sanctuary, with a significant public artwork inspired by the stories of local people affected by the upheaval and displacement caused by conflict.

Details are due to be announced later this year on the artist who will be working with Leicester Museums and Galleries on the project. The commissioned artworks are due to go on public display during 2023 and 2024.

Building on over 100 years of contemporary art commissioning by IWM, the IWM 14-18 NOW Legacy Fund also continues the vision and reach of 14-18 NOW, the official UK arts programme for the First World War centenary which engaged 35 million people, worked with 420 artists from 40 countries and staged projects in 220 locations across the UK, with 600 partner arts and heritage organisations.

The project is partly funded by £2.5million in royalties from the breath-taking First World War feature They Shall Not Grow Old, in which acclaimed Lord Of The Rings director Peter Jackson painstakingly restored and digitalised archive footage of life on the Western Front.

Alongside Leicester, there will be major commissions in Derry/Londonderry, Gateshead, Swansea and Glasgow, along with smaller commemorative projects involving a total of 22 artists working with 20 cultural organisations across the UK.

Leicester deputy city mayor for culture, leisure and sport, Cllr Piara Singh Clair said: “We are very honoured that Leicester has been included in the Imperial War Museum’s 14-18 NOW Legacy Fund project, which will involve a significant work of art commemorating all those whose lives have suffered upheaval and displacement caused by armed conflict.

“Leicester has a proud history as a City of Sanctuary, which is as relevant today as it has ever been, with refugees from Afghanistan and Ukraine among the latest to seek safety and rebuild their shattered lives here.”

Artists already confirmed for the project include Iraqi-American artist Michael Rakowitz, who will develop a new commission at the BALTIC Centre for Contemporary Art in Gateshead, Turner Prize 2022 nominee Heather Phillipson who will work with Swansea’s Glynn Vivian Art Gallery, and Glasgow-based artist Cathy Wilkes who will work with the city’s Hunterian Gallery.

In Derry/Londonderry, Ulster University’s commission will reflect on the 25th Anniversary of the Good Friday Agreement in 2023, and will see world-leading French contemporary circus collective Compagnie XY working with local communities on a new performance.

Two additional £250,000 commissions at IWM sites are due to be announced later this year.

Alongside the five major partner and two IWM commissions, 15 member organisations from IWM’s War and Conflict Subject Specialist Network will receive smaller grants of £20,000, including a range of universities, galleries, local authorities and social enterprises.

Diane Lees, Director-General of IWM, added: “IWM is delighted to be working in close partnership with such a breadth of UK organisations on this ambitious programme of art commissioning.

“After a challenging couple of years for the arts sector, we hope that the unprecedented opportunities enabled by the IWM 14-18 NOW Legacy Fund will kick-start cultural dialogue as we recover from the wide-reaching impacts of COVID-19.”

Since the First World War, IWM has worked with artists to record the experiences of conflict for its collections. The IWM 14-18 NOW Legacy Fund also extends the vision and reach of 14-18 NOW which, during the First World War centenary, engaged 35 million people, worked with 420 artists from 40 countries and staged projects in 220 locations across the UK, with 600 partner arts and heritage organisations.

Jenny Waldman, formerly Director of 14-18 NOW and now Director of Art Fund, said: “Over half of the UK population engaged with the 14-18 NOW programme of extraordinary arts commissions, demonstrating the power of art to engage new audiences and open up conversations about war and conflict..

“Thanks to the generosity of Peter Jackson, whose film They Shall Not Grow Old was a highlight of the programme, the 14-18 NOW Legacy Fund will build on this vision and reach, bringing exciting opportunities to artists, organisations and communities across the UK.”

Tim Marlow, IWM Trustee and Chair of IWM’s Arts Commissioning Committee, and Director of the Design Museum, added: “Since the First World War, IWM has worked with artists to record the experiences of conflict.

“It continues to commission new works from contemporary artists, reflecting on conflicts past and present. The impressive roster of artists selected for the 14-18 NOW Legacy Fund builds on this history, fostering collaboration and creativity to interpret conflict in new and thought-provoking ways.”

The second phase of expression of interest applications opens to members of IWM’s War and Conflict Subject Specialist Network from today until September 1, 2022.

To apply and for further information about the IWM 14-18 NOW Legacy Fund, please visit their website here.

The IWM 14-18 NOW Legacy Fund is a national programme of 22 artist commissions inspired by the heritage of conflict and created in partnership with Imperial War Museums (IWM) and 14-18 NOW, the official UK arts programme for the First World War centenary.

To mark the end of the First World War centenary, Imperial War Museums and 14-18 NOW worked together to co-commission the critically acclaimed film They Shall Not Grow Old by Academy Award winner Peter Jackson, which was seen by nearly 5 million people globally. Following the unprecedented success of the film, 14-18 NOW and IWM agreed that a share of the film’s royalties would be used to support a new programme of artist commissions, the IWM 14-18 NOW Legacy Fund. A total of £2.5 million is being made available to artists and cultural organisations across the UK.

Through the IWM 14-18 NOW Legacy Fund, IWM is now working in partnership with 20 cultural organisations from across the UK to commission 22 ambitious new artworks inspired by the heritage of conflict and created by world-leading and emerging contemporary artists. These new commissions will forge new opportunities for artistic engagement, bring art to audiences in new and relevant ways by connecting people, places and experiences, and kick-start cultural dialogue as we recover from the wide-reaching impacts of COVID-19. The commissions will go on public display across the UK between 2022 and 2024.

IWM (Imperial War Museums) tells the story of people who have lived, fought and died in conflicts involving Britain and the Commonwealth since the First World War.

Our unique collections, made up of the everyday and the exceptional, reveal stories of people, places, ideas and events. Using these, we tell vivid personal stories and create powerful physical experiences across our five museums that reflect the realities of war as both a destructive and creative force. We challenge people to look at conflict from different perspectives, enriching their understanding of the causes, course and consequences of war and its impact on people’s lives.

14-18 NOW was a programme of extraordinary arts experiences connecting people with the First World War, as part of the UK’s official centenary commemorations between 2014 and 2018. It commissioned new work by leading contemporary artists across all art forms; the programme included over 420 artists from 40 countries, taking place in more than 220 locations across the UK. 35 million people experienced the programme, including 8 million children and young people. 14-18 NOW won many awards for its work.

14-18 NOW was supported by the National Lottery Heritage Fund and Arts Council England, by the DCMS, and with additional funding from The Backstage Trust, Bloomberg Philanthropies, Clore Duffield Foundation, British Council, NatWest and support from individuals.