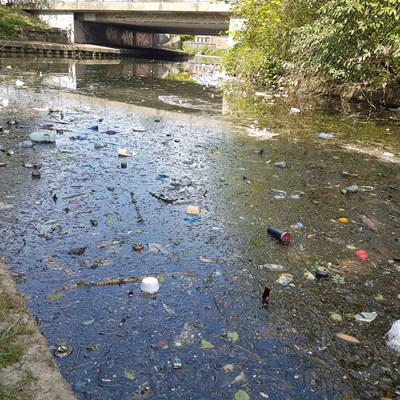 BUSINESSES and residents in parts of north-east Leicester are to be asked for their help in tackling an on-going litter problem in a nearby waterway.

From Monday (9 May), leaflets will be delivered to more than 300 homes and 50 businesses along a 2km-stretch of water known as the Willow Brook, setting out the issues caused by littering and asking people to report those who are dumping rubbish in the brook.

Willow Brook – which flows through a densely industrialised and populated part of Leicester, before joining the Grand Union Canal near Belgrave Circle – is so badly affected by litter that the council says it represents a significant environmental challenge.

Fly-tipping, litter and oil pollution are contaminating the water, harming wildlife habitats, polluting Leicester’s river and canal network and causing blockages that could increase the risk of flooding in the area.

Rubbish from the brook makes its way into to the Grand Union Canal, where it sits on the standing water, spoiling the canal for boaters, walkers and wildlife.

The litter also flows into the River Soar, where it pollutes the wider river network before eventually being discharged into the sea.

In a bid to get local people on board with the Willow Brook litter reduction scheme, a team of council staff and local ward councillors will be knocking on doors in the area with a survey to assess local views on littering.

The team will be calling on homes and businesses along the Willow Brook in Belgrave and North Evington from 9-20 May.

Ward councillors in Belgrave and North Evington are supporting the initiative and are keen to raise awareness of the problems caused by littering in the area.

“We’re asking people who live and work in the area around the Willow Brook to help us keep the brook clean by reporting those responsible for dumping waste in the water,” said Cllr Vandeviji Pandya, who represents North Evington ward.

“We hope this initiative will help raise awareness of the harm that littering can do to the environment, while reminding people of the correct ways to dispose of their waste.”

Belgrave ward councillor Nita Solanki added: “City council staff and environmental volunteers clear as much rubbish as they can from the brook – but trying to keep the water free from litter is a big problem.

“The only way we can clear up this important tributary of the River Soar is by stopping the litter from getting in there in the first place.

“That’s why we’re calling on local people and businesses to help us keep the Willow Brook clean – and improve the environment for everyone.”

The Willow Brook flows through Belgrave and North Evington wards, starting in Spinney Hills in the east, and joining the Grand Union Canal at Abbey Park in the west, before joining the River Soar near Sock Island.

Much of the brook is a highly engineered channel lined with concrete walls, but it is home to water voles, ducks, swans and even herons, whose health and habitats are compromised by pollutants in the water.

Deputy city mayor responsible for the environment, Cllr Adam Clarke, said: “Regrettably, urban areas like Leicester suffer the damaging effects of waste getting into rivers and water courses, to the detriment of the environment and already stretched council budgets.

“The accumulation of litter in the Willow Brook is an environmental challenge that we need to address, so I hope that this pilot project will help to raise awareness of the issue and gets the support of local people and businesses.”

The Willow Brook litter reduction scheme is led by the city council and supported by a number of stakeholders, including the Environment Agency and the Canal & River Trust.

People wishing to report litter or fly-tipping to the city council should call 0116 454 1001 or email city.warden@leicester.gov.uk

Any fly-tipping in watercourses can also be reported to the council by emailing flooding@leicester.gov.uk or via the LoveCleanStreets app.

Households wanting to dispose of large amounts of rubbish, or with bulky items that won’t fit into a wheely bin, should contact the city council to arrange a free bulky waste collection. Find out more at www.leicester.gov.uk/waste

More information about the Willow Brook litter reduction scheme is available at www.leicester.gov.uk/willowbrook