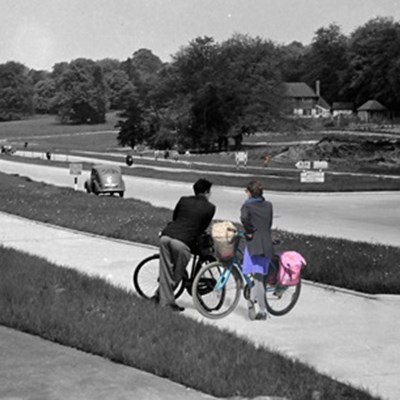 TREE-LINED cycle tracks that were first designed and built in the 1930s are set to be restored as part of a new project to improve walking and cycling routes in Leicester.

Leicester City Council has been awarded nearly £2.2million by the Department for Transport after a successful bid to its new agency, Active Travel England (ATE), which is led by Chris Boardman MBE.

The £2,175,000 funding will be used over the next 12 months to improve and extend two major routes for local people travelling on foot or by bike.

On Melton Road, from Lanesborough Road to the city boundary near the outer ring road, existing segregated cycle tracks will be upgraded. These tracks are part of a country-wide network first designed in the 1930s, when more people travelled by bike than by car, but the growing number of cars on the road meant cyclists needed to be kept safe. Across Britain, more than 250 miles of paved, separate cycle tracks were created.

In plans currently being drawn up, the cycle tracks on Melton Road – which are lined with cherry trees - will be tidied up and overlaid with smooth tarmac. New crossing points for people on foot and bike will also be added, to better link the route with surrounding neighbourhoods.

Both schemes will be designed over the coming months with support from Active Travel England. They will also be consulted upon, so local residents and businesses will get a chance to comment on the plans.

Deputy city mayor for transport and environment, Cllr Adam Clarke, said: “This funding award is fantastic news for Leicester, building on our track record of successful bids to Government to improve our cycling and walking infrastructure.

“Around 18,000 people make daily journeys by bike in Leicester, but one of the biggest barriers to regular walking and cycling is the need for safe and easy to follow direct routes. Creating off-road routes - and more space for pedestrians - means everyone can travel safely by bike or on foot. It’s interesting to note that this is exactly the same issue that led to the creation of segregated cycle lanes in the 1930s.

“As heritage champion for Leicester, I love the fact that we’ll be reviving the city’s past while making travel around the city more sustainable for the future. Sustainable travel means less congestion, less air pollution, better health and a better environment for us all.”

Cycling journalist and historian Carlton Reid rediscovered the 1930s cycling network across the country while researching for a forthcoming book. His research can be found at the project’s online home, bikeboom.info/1930s.

Carlton found that the Ministry of Transport was inspired by newspaper reports of similar lanes in the Netherlands – so, just as today, the UK was inspired by Dutch design for its cycle lanes.

Carlton said: “It’s brilliant to see my research helping to bring back to life an essential part of Leicester’s transport network. Working with urban designer John Dales, we cherry-picked 12 period schemes for in-depth design work, including this one in Leicester. The upgrades will allow people to use infrastructure that’s more than 80 years old yet still eminently practical.”

Figures show that the number of cyclists using routes has increased where infrastructure has been put in to separate cyclists from other traffic. In London Road, where a major scheme saw dedicated segregated cycle lanes created, usage increased by 280% from around 300 a day in November 2016 before construction of the scheme, to over 850 in April 2021. A similar scheme in Welford Road saw usage increase by 208% from around 230 in 2012 to 726 in 2019.

Leicester City Council is working on a number of major transport projects to promote sustainable travel and improve connectivity across the city. The Transforming Cities Fund is a major £80million city-wide programme of investment in sustainable transport, backed by £40million of Government cash from the Department for Transport.

This ambitious package of works focuses on major sustainable transport improvements to provide attractive choices for people to get to work, education, shops and other local facilities to help support the city’s growth and deliver on the council’s climate emergency, air quality and healthy living commitments.

The programme includes the development of new bus priority corridors linking the city centre to local neighbourhoods and suburbs, along with the continued development of a network of high-quality cycling and walking routes throughout the city, building on the success of the Connecting Leicester programme. It has also seen the introduction of electric buses onto Park and Ride services, and the Santander Cycles Leicester e-bike share scheme, which is currently expanding and will soon be the UK’s largest docked e-bike hire scheme.

As at December 2020, Leicester had an extensive cycle transport network totalling 235km of cycle facilities, with more than 100km of this either within the footway or entirely segregated from pedestrians and other traffic. An interactive map shows all of the city’s cycling routes at www.choosehowyoumove.co.uk

CAPTION: This composite pic of Mickleham bypass in Surrey shows similar period cycle tracks to those being restored in Leicester. It includes modern cyclists, in colour, to demonstrate how the tracks can be restored and reused. CREDIT: Carlton Reid