City to commemorate its fallen 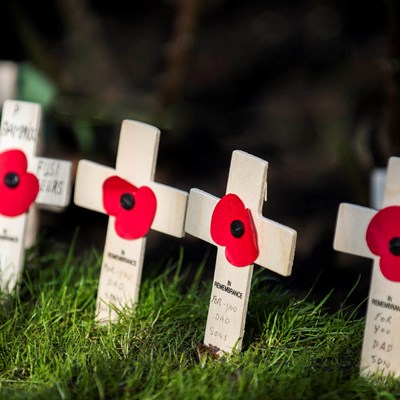 LEICESTER will fall silent to remember those who have lost their lives in armed conflict over the coming days as the city marks Remembrance Day.

On Friday, November 11 – Armistice Day itself – Leicester Market will hold its commemorations in which shoppers and stallholders can join the Lord Mayor and City Mayor in a service of remembrance from 10.55am.

The event, which is being held in conjunction with Leicester Cathedral, will feature a bugler and includes a two-minute silence at 11am.

The main annual Remembrance Day service will take place at Victoria Park, on Sunday, November 13, giving people an opportunity to pay their respects to the nation’s fallen servicemen and women.

This year’s service will return to almost its usual format with members of the public once more able to attend alongside invited guests and dignitaries for the first time since the pandemic.

People attending need to be in place by 10.40am, ahead of the parade made up of members from the Armed Forces, veterans and cadets which will step off from De Montfort Hall at about 10.45am, moving along Centenary Walk to the Arch of Remembrance. The parade will be followed by the official wreath laying parties.

The service will begin at 10.55am and will be led by Right Reverend Martyn Snow, Bishop of Leicester, with support from Dave Andrews, a former BBC Radio broadcaster.  It will include a customary two-minute silence at 11am, which will be heralded by a bugler sounding the Last Post.

Salutes will be fired to mark the beginning and end of the silence – visitors are reminded that the salutes create a very loud bang which could alarm young children and pets.

There will be an opportunity for members of the public to lay wreaths at the end of the service.

Limited public seating is available on a first come first served basis, along with designated seating for anyone with a disability or who is unable to stand for long periods.

To complete the service, a returning parade will step off through the Arch of Remembrance and back onto Centenary Walk, returning to the front of De Montfort Hall.

The events mean that the Granville Road car park will be closed from midnight on Saturday until around 1pm on the Sunday, with only a very limited number of spaces for disabled and blue badge holders available at the top end of the car park.

These need to be booked in advance by emailing lord.mayor@leicester.gov.uk or calling 0116 454 0020.

Both Granville Road and Regent Road will be closed to traffic from 9.30am around 12.15pm, will access allowed for residents on Salisbury Road.

Leicester Lord Mayor Cllr George Cole said: “Once more people from across the city and beyond will be taking a moment to honour those who have given their lives in armed conflict and to reflect upon their sacrifice.

“Sadly, world events show that the kind of military aggression which has cost so many lives over the years is still in evidence today.

“It is an honour to be involved in laying a wreath on behalf of the people of Leicester, as we give thanks to those who have paid the ultimate price trying to secure the peace and stability which we all too often take for granted.”

For the first time this year, Leicester deputy city mayor for culture, leisure and sport, Cllr Piara Singh Clair, will also join members of the local Sikh community before the main Remembrance Day service, to lay a wreath at a newly-installed statue of a Sikh soldier in Victoria Park.

They will assemble on Peace Walk at 9.30am before walking to the statue which commemorates the significant contribution of Sikh servicemen of the British Indian Army during the First World War.