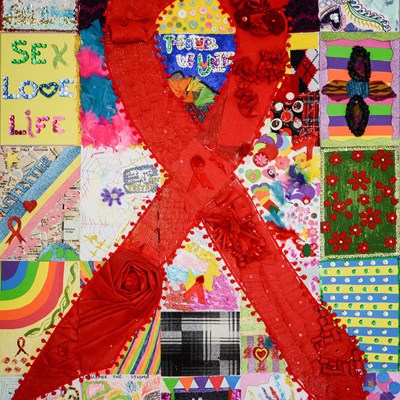 AN EXHIBITION that charts the city’s response to the HIV/AIDS epidemic from the 1980s to the present day opens at Leicester Museum & Art Gallery tomorrow (Friday).

Positive Leicester will tell the story of the changes in testing, treatment and public attitudes that have taken place in the 40 years since Terrence Higgins became one of the first people in the UK to die of an AIDS-related illness.

The first charts the evolution of the virus, from its emergence as a feared mystery illness to one that the UN hopes to eradicate by 2030.

The second is the story of the local LGBTQ+ community and the challenges it confronted during the AIDS crisis, and how the efforts of LGBTQ+ activists put pressure on the pharmaceutical industry and governments around the world to find ground-breaking treatments for people with HIV and AIDS.

Posters and videos from public awareness campaigns of the 1980s feature in the exhibition, as well as a quilt created by the Leicestershire Aids Support Service and families of those who had died from AIDS-related illnesses.

The exhibition also acknowledges the role of Warren Wiesner, the gay rights campaigner who became Leicester City Council’s AIDS co-ordinator in the late 1980s, and remembers the moment in 1987 when Princess Diana challenged misconceptions about the disease by shaking hands with a patient in the first dedicated HIV/AIDS unit at the Middlesex Hospital in London.

Gavin Brown, a trustee at Trade Sexual Health, said: "This exhibition shows how hard the LGBTQ+ community, in Leicester and internationally, fought to improve treatments and care for people living with HIV.

“It’s important to remember this legacy, but also to recognise how much progress has been made over the last 40 years. Treatments for HIV have improved significantly – one pill a day now means that people living with HIV who have an undetectable viral load cannot pass on the virus. Understanding this simple fact is crucial to challenging stigma around HIV.

“Testing for HIV is quick and easy. We recommend that everyone tests regularly – knowing your HIV status protects your health and the health of your partners.”

The exhibition – which can be found in the Leicester Stories gallery at Leicester Museum & Art Gallery – continues until 6 January 2023.