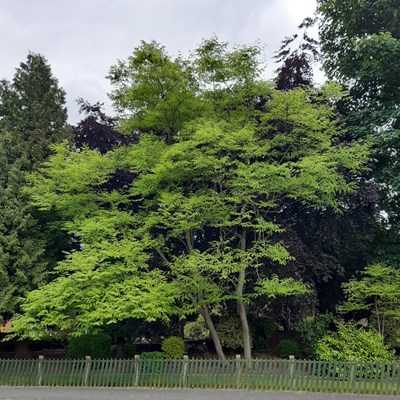 AN ONLINE resource that will encourage people to find out more about the magnificent trees in Abbey Park has gone live today (Monday 28 November).

Launched as part of National Tree Week, the digital tree trail provides photographs and detailed descriptions of 21 of the park’s trees, as well as an interactive map that will help visitors to locate them all.

The trees featured in the trail reflect the huge variety of species in the park, including British natives, exotic trees and ancient species.

An English Oak, planted by the Princess of Wales in 1882 to mark the opening of the park, is included on the trail, as is the park’s exotically-named Kentucky Coffee Tree – so called because its seeds resemble coffee beans.

Also featured are some ancient species, including a Monkey Puzzle Tree – a species that was native to Britain until it died out in the first Ice Age – and the Maidenhair Tree, the last living species in the order Ginkgoales which first appeared over 290 million years ago.

More familiar trees, such as the Horse Chestnut, the Silver Birch and the Weeping Willow, are also on the trail. The Elm, which disappeared from Britain’s parks in the 1970s following the Dutch Elm Disease pandemic, is back in Abbey Park and included on the trail, thanks to a new disease-resistant strain called ‘Elm New Horizon’.

The online resource lists the trees under their Latin names, alongside their common names, and provides a brief history of each tree, as well as descriptions of their foliage, their seeds and their flowers.

Deputy city mayor for transport, clean air and climate emergency, Cllr Adam Clarke, said: “We’re fortunate to have hundreds of magnificent trees in Abbey Park that provide shade in summer and glorious colour in autumn, while storing carbon, creating oxygen and sheltering wildlife all year round. But it’s surprising how few species we can actually recognise.

“This online tree trail will help people to find out more about the trees that surround us – and to get even more from their visit to Abbey Park.

“National Tree Week provides the perfect opportunity to get out and about and enjoy the natural world around us.”

The Abbey Park Tree Trail is now live at www.leicester.gov.uk/AbbeyParkTreeTrail

The Abbey Park Tree Trail has been launched as part of National Tree Week, which runs from 26 November – 4 December and marks the start of the winter tree- planting season.

This year, the city council plans to plant more than 7,000 new trees in Leicester’s parks and open spaces, on roadside verges, on school sites and on housing land.

An update of Leicester’s five-year Tree Strategy reviews progress made during 2021-22 and notes that the city council planted 19 new trees for every tree lost in 2021/22, and planted a total of 11,753 trees.