Free activities this weekend at Open Streets and Bike Fest 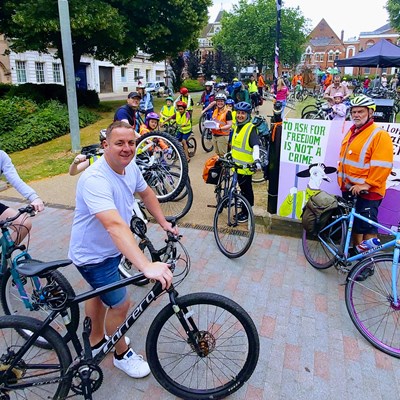 ENJOY exploring Leicester by bike or on foot this weekend, with free family-friendly activities on offer at Open Streets and Bike Fest.

Expert instructors and coaches will be on hand at the circuit, at New College, with coaching available for kids aged 5-16. Cycles for all ages and abilities are available to use, for free, including balance bikes for younger children. Dr Bike will offer free basic bike fixes and safety checks, plus a range of Wheels For All adapted bikes will be available to try. There’s also a new café at the circuit, with drinks and refreshments available.

On Sunday 30 October from 1-4pm, Open Streets will see a variety of free activities take place on people-friendly pedestrianised streets and spaces in Leicester city centre.

The theme for this month’s Open Streets is ‘Unearthed Leicester’, bringing the past to life and celebrating the city’s rich 2,000-year history.  As part of this, a Richard III-themed led ride will set off from the Town Hall Bike Park at 10am, passing the site of the car park where the King’s body was discovered, following a route to Bosworth Battlefield using quiet roads and traffic-free paths, and later returning to finish at the King Richard III Visitor Centre.

Another ride will set off from the Town Hall Bike Park at 12pm, offering a unique chance to explore Roman Leicester by bike. Ride Roman Leicester will be led by Hidden Histories’ Jim Butler, and along the route there will be several stops at places of interest with Roman connections in the city, providing a glimpse into Roman life in Leicester.

In addition, all of the regular features of the city’s Open Streets event will be on offer – including bike-themed games and crafts from Cyclone Works, street art from Graffwerk, free bike fixes and Danny Butler’s extreme mountain bike show. Try your hand at the rock climbing wall, listen to the drumming sounds of Sambando or relax to the soulful tunes of BETAcoustiX outside Orso Café.

And visitors to the city centre can grab a free rickshaw ride to move between the areas where activities are taking place - Beta X on Church Gate, Green Dragon Square and Town Hall Square. Or take a trip on a Santander Cycles Leicester e-bike, with friendly Ride Leicester staff available to help people to register and get started with the city’s popular e-bike share scheme.

Everything is designed to demonstrate how easy it can be to get around Leicester by bike or on foot – as well as showcasing some of the city’s beautiful, and often overlooked, heritage. It’s also the last Heritage Sunday of the year, where visitors can explore some of the remarkable buildings clustered around the Newarke and De Montfort University campus, telling the story of Leicester from its Roman to its manufacturing heyday.

Deputy city mayor for transport, clean air and the climate emergency, Cllr Adam Clarke, said: "October marks the end of our monthly Open Streets, Heritage Sundays and Bike Fest events for 2022, so this is your last chance to enjoy these free activities until they return next spring.

“We know lots of people have enjoyed being able to take part in these activities again, which show how improvements made to our city centre make it a great place for meeting and spending time, and how easy it is to get around by bike or on foot.

“We’ll continue to invest in the city centre – as demonstrated by our ambitious £8million scheme to enhance and extend the pedestrianised streets around the historic Clock Tower – so that everyone can enjoy Leicester’s heritage, shopping, leisure and open spaces.”

More information on Open Streets is at: https://visitleicester.info/whats-on/open-streets-p819671

More information on Bike Fest is at: https://www.visitleicester.info/whats-on/bike-fest-p822091