Leicester gets ready for Diwali lights’ switch-on on Sunday 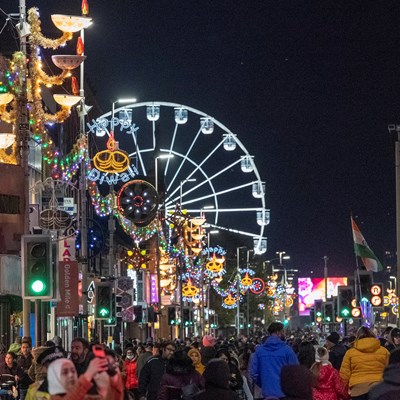 PREPARATIONS are now well under way for the switch-on of Leicester’s famous Diwali lights on Sunday (9 October) – and bus users and drivers are reminded that the event will require road closures in the area.

Belgrave Road will be partially closed between Belgrave Circle and Garfield Street from 10am on Sunday. Vehicles, however, will still be able to access the rest of Belgrave Road from the Melton Road/Loughborough Road end until 5pm.

Belgrave Road, and the junctions with its side roads, will then be fully closed to traffic from 5pm until around 9.30pm.

In order to maintain clear routes for emergency vehicles through the Belgrave area, parking will be suspended on a number of streets in the area from 6am until 10pm on Sunday.

‘No waiting’ cones will be laid out on Loughborough Road, Holden Street, Ross Walk, Macdonald Road, Hildyard Road, Marjorie Street, Abbey Park Street, Harrison Road, Surrey Street, Doncaster Road, Cossington Street, Rothley Street, Rendell Road and Portsmouth Road. Any vehicles parked on these roads between 6am and 10pm on Sunday, and any vehicle causing an obstruction on any road in the Belgrave area, will be ticketed and towed away.

People are strongly advised to join Sunday’s celebrations on foot, by bike or by public transport.

A special Diwali park & ride service will be running on Sunday, with buses leaving the Birstall Park & Ride site – located at LE4 4NN – from 4pm until 10pm (no service between 7pm and 8pm).

Passengers will be dropped off, and picked up, on Belgrave Road, close to Lower Willow Street.

A return journey for a group of up to five people in one car costs just £6.

The last bus to the Birstall Park & Ride site will leave Belgrave Road at 10pm on Sunday.

People using regular bus services are advised that buses will be diverted when Belgrave Road is closed to traffic.

The switch-on event, featuring a Diwali Village – which opens at 3pm – a live stage programme, a glittering big wheel and a spectacular aerial firework display, is expected to draw crowds of around 40,000 people.

A packed programme of live entertainment from 5.30pm will be followed by the switch-on of 6,000 colourful lights at 7.30pm, culminating in a stunning firework display.

Leicester’s deputy city mayor for culture, leisure and sport, Cllr Piara Singh Clair, said: “Our world-famous Diwali festival is a Leicester tradition that brings our communities together to celebrate the Festival of Light.

“I am delighted that the event is back for 2022 and would like to invite everyone to the Golden Mile on Sunday to enjoy the magic of one of the largest Diwali celebrations outside of India.”

This year’s event is being supported by the University of Leicester, with Professor Nishan Canagarajah, President and Vice-Chancellor of the University, having the honour of switching on the lights at 7.30pm.

Diwali Day, on Monday 24 October, will also be marked with a day of special events.

Full details of Leicester’s Diwali celebrations are available at visitleicester.info/diwali