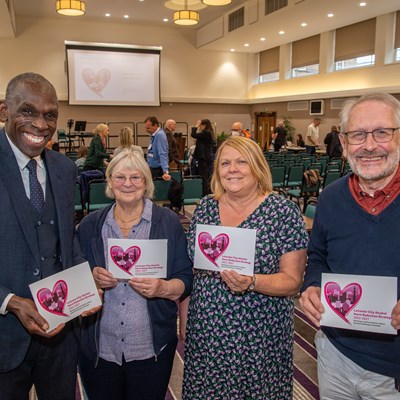 A WIDE-ranging strategy has been launched setting out ways to try to reduce harmful drinking in Leicester.

By working in partnership with the police, public health, universities and the alcohol trade, the council wants to promote responsible selling of alcohol, improve health and wellbeing through appropriate treatment, as well as protecting children, young people and families from alcohol-related harm, and reducing alcohol-related crime, antisocial behaviour and domestic abuse.

The strategy was launched at an event in City Hall, opened by City Mayor Peter Soulsby, assistant city mayor for health and wellbeing Cllr Vi Dempster, and with an address by Leicester South MP and former shadow health secretary, Jon Ashworth – a vocal supporter of work to tackle the misery and damage alcohol can cause to families.

Alcohol-related mortality in Leicester is higher than the national average, despite more than half of the population not drinking. Since the pandemic there’s also been a rise in people drinking alcohol at home, where they typically consume more than if they were out.

Goals include encouraging people to make safer choices about drinking, including choosing to not drink alcohol, without feeling uncomfortable or embarrassed, and ensuring help is available to families needing to tackle problem drinking. Supporting people to identify alcohol-related problems early, and accessing the right help, is also key.

The partnership also sets out plans to encourage retailers, business and licensed premises across the city to play their part in responsibly promoting, advertising and selling alcohol. Measures to tackle alcohol-related crime, disorder and antisocial behaviour are also highlighted.

Leicester assistant city mayor for health and wellbeing, Cllr Vi Dempster, said: “There are many ways in which problem drinking can affect people’s lives – poor health, violence, crime, loss of employment or family breakdown for example – and no one agency can address all these issues alone.

“It is therefore vital that we work in partnership with the organisations who have expertise in each of these areas, to identify problems early and make sure help is available and accessible to the people who need it.

“We need to ensure everyone plays their part in reducing the alcohol-related harm, in all its forms, in Leicester.”

Taking action to tackle harmful drinking is a subject which Leicester South MP Jon Ashworth feels strongly about, having grown up with an alcoholic father.

He added: “Harmful alcohol use needs to be taken more seriously – all too often heavy drinking and the culture surrounding that is treated as a bit of fun, when in reality it is behind a wide-ranging set of problems such as ill health, antisocial behaviour and domestic abuse.

“I welcome this strategy which sets out how different agencies and organisations can work together to meet these goals of a culture of safer, more responsible drinking.”