Work begins to light up Leicester ready for Christmas 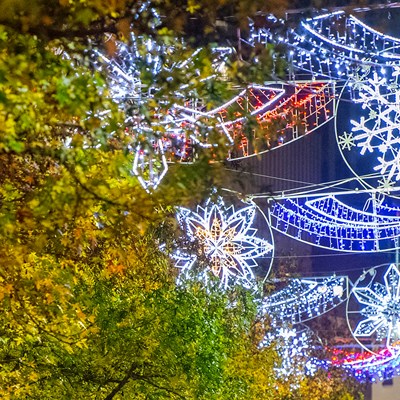 THE annual task of dressing the city centre with colourful garlands and thousands of festive lights begins next week, as Leicester gets ready for Christmas.

This year’s Christmas Lights Switch On celebration will take place on Thursday 17 November, but before then the city council’s lighting team have a mammoth task ahead of them

From Tuesday (18 October), the team will start putting up the decorations that cross the city’s main shopping streets and begin installing the 16,000 energy-efficient lamps that will light up Leicester throughout the festive period.

Decorating the city – including Town Hall Square and around 20 city centre streets – will take around four weeks, with work being carried out early in the morning and at weekends to minimise disruption.

The centrepiece of the festive decorations – a mighty 46ft Christmas tree from Kielder Forest in Northumberland – is due to arrive during the first week of November when it will take pride of place next to the Clock Tower.

A new Christmas grotto will be built in Town Hall Square ready for the Santa’s annual visit to the city. Santa in The Square will be free to visit and opens from Saturday 3rd December until Friday 23rd December.

The traditional nativity scene will also return to Town Hall Square in time for the big switch on.

This year, the city council has spent around £15,000 replacing worn out decorations and giving a new look to the existing garlands that span Granby Street.

In Green Dragon Square at Leicester Market, illuminated garlands will be strung between the square’s lamp columns and the trees will be lit with pea lights.

The massive 35m-high Wheel of Light will return to illuminate Jubilee Square – as well as offering people the chance to see Leicester’s Christmas lights from a new perspective – from Friday 11 November. The popular ice rink attraction is also due to make its return to Jubilee Square from Thursday 1 December.

This year’s Christmas Switch On will be held on Thursday 17 November from 5pm until 8pm. There will be activities taking place at key locations around the city centre. A countdown – played out on speakers at 6.30pm – will herald the switch-on of Leicester’s Christmas lights. Full details will be publicised nearer the time.

Deputy city mayor Cllr Piara Singh Clair said: “Our lighting team are working hard to make sure Leicester looks magical in time for Christmas and throughout the festive season.

“I hope that as the decorations begin to appear across the city centre, people will look forward to our big Switch On celebration and a happy Christmas.”

Low energy LED bulbs are used in all of Leicester’s Christmas decorations. This helps keep down the costs of their running and maintenance. Last year, the total energy cost for the Christmas lights was just over £3,000.