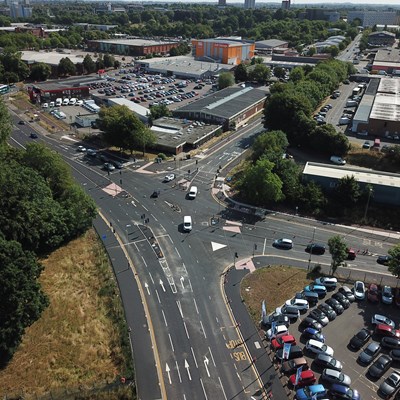 The £5million Putney Road link road project, which was part funded by £3.2million from the Government’s National Productivity Investment Fund, is designed to create a shorter route for traffic moving east to west across the southern part of the city, as well as helping to relieve congestion on the southern ring road, deter rat running and to support economic growth with better access to businesses in the Freemen’s Common Industrial Estate.

Traffic can now travel from Welford Road and Victoria Park Road through a remodelled Putney Road to a new junction connecting it with Aylestone Road and Saffron Lane.

The Putney Road scheme will also save around 340 tonnes of CO2 each year, and combined with other council road schemes nearby, means it is now possible to travel via a segregated cycle lane between Leicester station and the King Power Stadium, which has recently been given the green light for a huge expansion project.

An extensive redevelopment by the University of Leicester at its new Freemen’s Common Campus, on Welford Road is also closely linked with the Putney Road scheme, via improved connectivity through a network of new high-quality walking and cycling links, new road crossings and other sustainable transport works costing £2.9m and funded through existing budgets from the Government’s Department for Transport grants.

Leicester Deputy City Mayor for transport, clean air and climate emergency, Cllr Adam Clarke, said: “These two schemes at each end of Putney Road have transformed the area, by enabling the development of a new university campus, creating a much-needed link road connecting the east and west of the city, and incorporating sustainable transport improvements to junctions, crossings and infrastructure for walking and cycling.

“The Putney Road link road scheme will reduce journey times, cut traffic pollution and deter drivers from cutting through smaller residential streets in Knighton Fields in order to take a short cut from the east to the west of the city.”

Contractors Balfour Beatty carried out the scheme to open up the link road and create a new junction between Putney Road and Aylestone Road, while contractors Engie have been responsible for the roadworks forming part of the university campus scheme.

The road scheme was carried out in tandem with the University of Leicester’s new £150million student village in Welford Road, which was officially opened on Monday, October 24.

The university’s regeneration project saw derelict halls of residence and an open-air car park transformed into a high-tech centre for teaching, working and living.

It includes the new four-storey Sir Bob Burgess Building, named after the university’s former late Vice-Chancellor, as well accommodation for 1,200 students, a social hub including a food outlet and bar and a 555-space multi-storey car park.

The university’s Deputy Vice-Chancellor (professional services), Kerry Law, added: “Freemen’s is the realisation of years of careful planning to deliver the very highest quality environment for our students to live and learn in.

“We have been delighted with the positive reaction of both students and staff as they settle into their new home, which extends our vibrant city campus.

“Freemen’s doesn’t only deliver first-class facilities for students and colleagues, but also provides benefits for the public, including pleasant open spaces and safer routes for pedestrians and cyclists.

“The regeneration of a tired site into a landmark new neighbourhood is something the university and city can be very proud of, as the university embarks on its second century.”