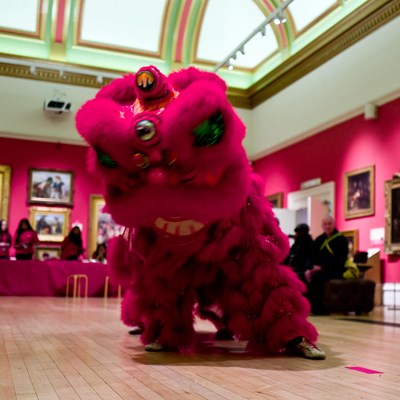 A WEEKEND of special events coordinated by Leicester-based Cosmopolitan Arts will mark the start of the Chinese Year of the Rabbit.

From Friday (20 January), people will be able to have a go at Chinese calligraphy, play traditional games or try Chinese foods at a Chinese arts workshop at the Haymarket shopping centre.

The workshop will run alongside an immersive digital exhibition featuring seven documentaries that chart the stories of some of those who migrated to the UK from China.

Each film focuses on one decade, from the 1950s until the 2010s, with members of Leicester’s Chinese community amongst those recalling their journey, their arrival, and their acclimatisation to English life and culture.

The exhibition and workshop at the Haymarket shopping centre is open from 11am until 4pm from Friday 20 January until Sunday 22 January.

The colourful event will feature traditional and contemporary dance, as well as musical performances from Guzheng virtuoso Xiao Ying, and the nationally renowned artist Ling Peng.

The Chinese New Year Show at Leicester Museum on New Walk runs from 11am until 4pm.

From 2.30pm on Sunday (22 January), a traditional Chinese procession will mark the start of the Chinese New Year as it wends its way from De Montfort University to the city centre, featuring lion dancers, martial artists and pyrotechnics.

Bringing the celebrations to a close will be a spectacular large-scale performance in Green Dragon Square, with live music, pyrotechnics and fireworks from 4.30pm until 5.20pm.

From East to East: The Story of Chinese Migration To the East Midlands is supported by funding from the Heritage Lottery Fund. Special events marking the Chinese New Year are supported with funding from Arts Council England.

The events will be repeated in Nottingham from 27-29 January and in Derby from 3-5 February.