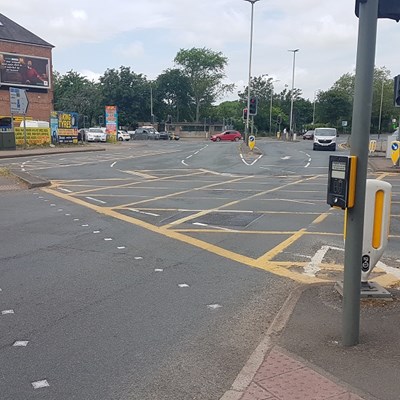 A MAJOR programme of improvements to one of Leicester’s ‘most confusing’ junctions and its connecting roads will begin next week.

Leicester City Council is planning a major redevelopment of the A50/FiveWays junction, in northwest Leicester, to help make it safer for all road users, including cyclists and pedestrians, and improve the busy route for buses.

As part of the project, the council will completely redesign and overhaul the busy FiveWays junction which links Blackbird Road, Woodgate, Fosse Road North, Groby Road and Buckminster Road.

Work will be carried out in phases to help minimise disruption, and the overall project is expected to be complete by spring 2024.

The first phase of work is due to begin on Buckminster Road from Monday 23 January. This will involve narrowing its junctions with Blackbird Road and Colwell Road; the installation of a new raised table on Colwell Road to improve safety for people walking and riding bikes; and existing car parking on verges close to the shops on Buckminster Road will be removed. New landscaping will also be introduced.

This initial phase of work is expected to take around six to eight weeks during which time a lane restriction will be required on part of Blackbird Road, and Buckminster Road will be closed to through traffic. Local diversions will be in place.

The current experimental road closure on Buckminster Road will also be removed at the start of the FiveWays redevelopment work, and a review and surveys will be carried out after the highway works are completed to fully understand the impact of the new junction on traffic flow on Buckminster Road and surrounding streets.

A second phase of work – which will involve improvements to Fosse Road North between the FiveWays junction and Stephenson Drive – is due to begin from Monday 13 February.

This will involve removing the existing mini roundabout at the junction of Fosse Road North and Stephenson Road and replacing it with a signalised junction, and widening the road to help provide a new bus only lane on Fosse Road North on the approach to FiveWays junction. A new cycle track will be created and raised table crossings will be installed across Bonchurch Street and Central Road to improve pedestrian safety. Access to Rally Park will also be improved.

Work on Fosse Road North is expected to take around 14 weeks to complete and will require the road to be closed to southbound traffic. Well signed diversions will be in place. Some bus services will also be affected, with diversions and nearby alternative routes in place.

Details of future phases of work – which are due to begin in April – will be publicised nearer the time.

Deputy city mayor Cllr Adam Clarke, who leads on environment and transportation, said: “These ambitious works represent a long-standing commitment to improving the FiveWays junction – which is one of the most confusing junctions in the city – and a continuation of our ambitious vision to encourage cleaner, greener, healthier, and cheaper transport in and around Leicester.

“The improvements will help simplify the junction for drivers, make it a much less daunting proposition for cyclists, allow buses to move more quickly along this route and help make the area a more attractive place for people.

“It is a major investment that will help ensure this busy and important part of the city’s transport network is able to accommodate the predicted growth for decades to come.”

The scheme – which is expected to cost about £10.4million – will be paid for through a mix of Enterprise Zone funding through the Leicester and Leicestershire Enterprise Partnership (LLEP), and the Transforming Cities Fund following the city council’s successful bid for £32million of second tranche funding to support improvements to public transport and providing more safer cycling and walking routes into city neighbourhoods and the city centre.

Andy Reed OBE, Co-Chair of the LLEP, said: "This project will improve access by linking the city centre up with surrounding neighbourhoods. It will also develop new routes and crossings for e-bikes, public transport and pedestrians.

"As with any project of this scale, there may be some disruption during development. Completing the work in phases will help to address this as this busy junction is made safer and more attractive for all users."

The work will be carried out by Thomas Bow City Asphalt – one of the biggest building and civil engineering contactors in the East Midlands – under contract to Leicester City Council.

For more information about the forthcoming works to the A50/FiveWays junction visit www.leicester.gov.uk/TransformingCitiesFund