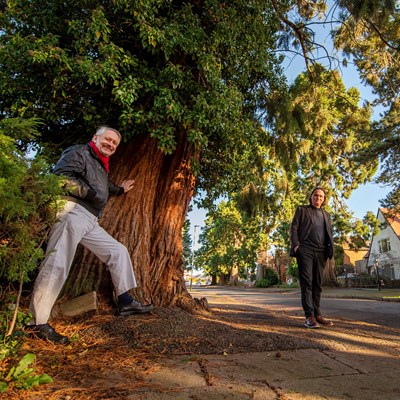 MORE than two dozen giant trees, some well over a century old and which characterise a Leicester suburb, are being given protection under a new strategy by Leicester City Council.

Pine Tree Avenue in Humberstone is home to 26 huge trees including 21 giant redwoods, a cedar, a pine, a beech, a chestnut tree and a lime tree, some of which are believed to be about 150 years old.

They once formed a tree-lined drive to the former Humberstone Hall, which was demolished many years ago, and have since grown into towering specimens which give the residential street its distinctive appearance.

The redwood trees, which are native to California, can grow to more than 200ft (61m) high with three metre-wide trunks. While the specimens in Pine Tree Avenue have not yet reached maturity, the species is among the biggest on Earth, with the oldest examples living for more 3,000 years.

Back in 2001, tree preservation orders were made to cover the trees, some of which are owned by city council, others which are jointly owned and some which are entirely privately owned.

Now the city council has prepared a broader Tree Preservation Strategy, recognising their importance to the city’s environment, air quality and the character of the area, and supporting that in planning guidance. It will apply to all 26 of the trees, whether private or council-owned.

The Pine Tree Avenue Tree Preservation Strategy is due to be published this week setting out how these vast, mature trees can be protected for future generations.

It builds on the work of the city council’s Tree Strategy which was launched in November 2018.

The five-year strategy sets out guidelines for sustaining and increasing the city’s tree stock, improving the quality of the city’s trees and promoting the importance of trees in maintaining a high-quality city environment, reducing air pollution and contributing to flood risk management.

Leicester City Mayor Peter Soulsby said: “The trees at Pine Tree Avenue are hugely important both in the distinctive character of the area, and as part of the city’s local heritage and history.

“Rather like the city’s historic buildings, they are reminders of Leicester’s past, and pre-date the city’s modern layout, and which need careful work to preserve for future generations.

“By making Pine Tree Avenue’s trees subject to this strategy, we are showing that we are serious about protecting them and preserving their place in the community for years to come.”

There are currently about 150,000 trees and 107 hectares of woodland in the council’s ownership - 57,000 of these trees have been planted since the 1980s. There are over 500 Tree Preservation Orders (TPOs) in place in the city. The city council also has a policy of planting more than one replacement tree for any tree that is felled.

Information on tree protection in Leicester, including the Pine Tree Avenue strategy, is available here.