City's new market square to be named after medieval inn 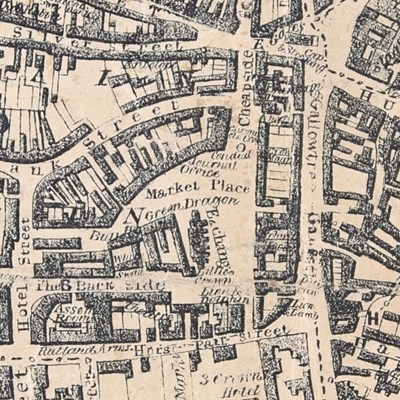 A NEW public square in Leicester city centre is to be named after a medieval inn that once stood on the site.

The attractive space at the back of the city’s historic Corn Exchange – created when the city council demolished a 1970s market hall – has been known as ‘the new market square’ since its completion in 2017.

But, finally, the square is to have its own identity, with the city council announcing that the space is to be called Green Dragon Square – a move that will bring back to life some long-forgotten stories from the area.

City Mayor Peter Soulsby said: “This part of Leicester is steeped in history, with the market at the very heart of medieval life in the city.

“The timber-framed Green Dragon tavern stood in what was known as the ‘Saturday Market’ from around the 15th century.

“It was one of a number of pubs that served local merchants and traders – but its role in an 18th century murder case gives it a unique place in Leicester’s history.”

The fatal shooting of John Fenton – whose mother was the landlord of the Green Dragon inn ­– took place on 16 May 1778.

According to historic resources, a French teacher called Francis Soulés was playing billiards in the Lion and Dolphin with John’s brother, James Fenton, when an argument broke out.

Clearly aggrieved, Soulés left the inn and returned with two pistols, challenging Fenton to a fight.

Fenton grabbed a pistol and fled, presumably fearing for his life.

Soulés followed James Fenton to the nearby Green Dragon inn, where John Fenton got hold of Soulés and tried to throw him out of the house. During the scuffle, Soulés pulled a pistol from his pocket and a shot was fired at John Fenton.

John Fenton died from his injuries the next day.

At his trial at Leicester’s Guildhall, the jury accepted that Soulés had only gone to the Green Dragon to recover his property – the pistol – but the judge found him guilty of murder and an order was sent for his execution.

In a remarkable twist, however, a messenger arrived shortly afterwards, bearing a royal pardon, and Soulés’ life was spared. He left Leicester and returned to France.

John Fenton was buried in St Martin’s churchyard, and his gravestone – bearing an inscription criticising the judicial institutions that failed “to punish a murderer” – is still in the safekeeping of Leicester Cathedral.

The Green Dragon inn – which stood close to where the Alice Hawkins statue is today ­– continued to trade until the mid-19th century but was demolished in around 1850.

It was one of five important pubs in the 16th century Market Place, with the White Swan, the Lion and Dolphin, the Bull’s Head and the Angel also doing brisk trade in the market at that time.

City Mayor Peter Soulsby said: “The names of two of these medieval inns live on in the market area today, with Dolphin Square and Angel Gateway reminding us of the area’s history.

Green Dragon Square will be officially named on Tuesday 11 February, when HRH The Prince of Wales and HRH The Duchess of Cornwall will unveil a plaque during their visit to Leicester Market.

New heritage panels that tell the story of the Green Dragon inn and the death of John Fenton will be installed in the square later this year.

Picture caption: Extract of Leicester map from 1844, showing the location of the Green Dragon inn: courtesy of the Record Office for Leicestershire, Leicester and Rutland