World-class festival set to light up Leicester this week 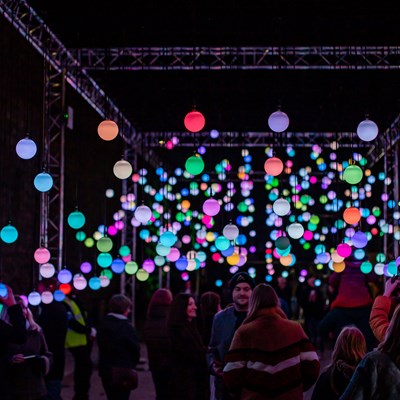 LEICESTER city centre will be lit up with some extraordinary illuminated artworks this week as part of a brand new international festival.

Light Up Leicester will offer a digital take on traditional light festivals, with each of the seven large-scale installations interacting with people through sound or sensors, reacting to light, temperature or humidity levels, or responding to data, thanks to an internet connection.

Four of the artworks that will be installed in Leicester city centre from Thursday (5 March) have already enjoyed success in the UK and elsewhere, but three new pieces have been specially commissioned for the festival and will be shown in Leicester for the first time.

Shadowdance ­ - an interactive installation in Green Dragon Square - will transform people’s shadows into gigantic colourful silhouettes, Unexpected Connection will bring people together in an interactive LED tunnel in Jubilee Square, while Leicester-based Mateus Domingo has created a matrix of lights for Leicester Market. Called Traces, the artwork will capture visitors’ ‘traces’, allowing them to leave their own mark on the illuminations.

Also confirmed for the Leicester festival is Wave-Field, which will bring eight illuminated see-saws that are activated when people play on them to Humbersone Gate, while Youth Culture – a 3-metre high interactive sculpture – will be installed in Orton Square.

Silver Street will host Shoefiti – a playful display of dangling LED trainers – while St Peter’s Square at Highcross will be transformed with 500 points of lights and 500 voices as part of an immersive artwork called Wave (pictured).

Together, the seven installations will create a stunning night-time spectacle in Leicester city centre that will be free for everyone to enjoy.

Deputy city mayor Cllr Piara Singh Clair said: “Light Up Leicester will bring together acclaimed works by international artists with three brand new installations that will be shown for the first time here in Leicester.

“Each of the pieces will encourage people to interact with them – and each of these illuminated works will help transform the night-time ambience in Leicester city centre during the four days of the festival.

“We’re very grateful to Arts Council England and BID Leicester for supporting this event, and we look forward to working with our partners to deliver what should be a very special festival for Leicester.”

“This is the first event of its kind in Leicester, and we’re looking forward to welcoming thousands of visitors to spend time in the city and enjoy this free, four-day festival.”

Sam Javid, executive producer at ArtReach - the Leicester-based arts organisation that’s working with the city council and partners to deliver the festival - said: "As producers, it’s our job to bring artists and organisations together to create memorable and magical experiences. This new festival does just that – anyone in the city centre from 5-8 March will know something truly exceptional is happening."

Light Up Leicester runs from Thursday 5 March until Sunday 8 March.

The festival is supported by funding from Arts Council England, Leicester City Council and BID Leicester.

More information about Light Up Leicester is available at www.lightupleicester.com

Arts Council England is the national development body for arts and culture across England, working to enrich people’s lives. We support a range of activities across the arts, museums and libraries – from theatre to visual art, reading to dance, music to literature, and crafts to collections. Great art and culture inspires us, brings us together and teaches us about ourselves and the world around us. In short, it makes life better. Between 2018 and 2022, we will invest £1.45billion of public money from government and an estimated £860million from the National Lottery to help create these experiences for as many people as possible across the country. www.artscouncil.org.uk