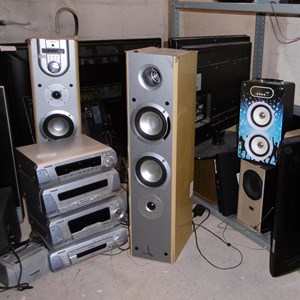 LOUDSPEAKERS and stereo equipment have been seized from two more houses in Leicester following complaints of noise nuisance.

The two latest incidents, at homes in Evington and Aylestone, bring to a total of seven the number of times noise-making equipment has been confiscated in the city since September 2020.

Noise and pollution control team staff from Leicester City Council, often working with the police, respond to reports of noise problems across the city.

Ongoing lockdown restrictions since March 2020 mean people are spending more time at home and are less able to get away from noise problems.

If the householders responsible do not respond to warnings to stop, a warrant to carry out enforcement action can be requested through magistrates to seize the equipment involved.

The latest incidents included a property in Ethel Road, Evington, where police and council officers seized a loudspeaker earlier this month which was being used to play very loud music into the early hours of the morning.

Officers also seized six loudspeakers from a house in Gedge Way, in the Saffron Lane Estate, after the owner ignored ongoing advice to turn down the level of music being played.

Leicester City Council’s noise and pollution control team manager Robin Marston said: “During lockdown it is even more important that people think about their own actions and how they are affecting their neighbours.

“Our noise and pollution control team is still getting reports of noise from properties, and the number of seizures undertaken in the last seven months indicates that some people have not taken notice of any warnings they have been given.

“In these two most recent cases, we’ve had to confiscate a range of loud speakers and music equipment because all other efforts to resolve the problems failed.

“We will continue to take formal action where needed to ensure that local residents are protected from antisocial noise from their neighbours.”

In all cases where equipment is confiscated, the owners can pay to get it back after 28 days, if they pay the costs incurred from storing the items.

Leicester assistant city mayor for neighbourhoods, Cllr Kirk Master, added: “No one should have to put up with noise nuisance like this, especially during the current lockdown restrictions when people are spending more time than usual at home.

“Often, a warning letter to the householder responsible is enough to make them realise how much of a nuisance they are causing to neighbours, and to stop.

“But in other cases we have to take enforcement action as the only way to resolve the problem when other approaches have been tried and have failed.”

People wanting to report a noise nuisance should do so via the city council’s website, following which an officer from the noise and pollution control team will get in touch to discuss the best way forward.