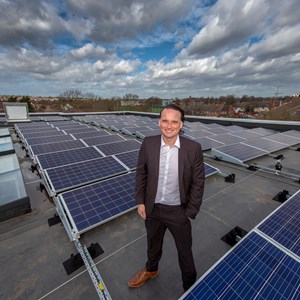 OVER 90 council buildings in Leicester, including schools, leisure centres, libraries and community centres are set to benefit from a multi-million pound programme of low carbon, energy efficient improvements.

The new funding – provided by the Department for Business, Energy and Industrial Strategy – will pay for an ambitious programme of works to cut the carbon footprint of 92 council-owned buildings and help save on energy costs.

Leicester City Council will contribute around £860,000 of capital as match-funding towards the programme.

It is estimated that the energy efficiency improvements will result in overall carbon savings of around 3000tCO2e per year – equivalent average annual emissions produced by over 900 homes or 1,600 cars.

The investment will also help cut the council’s annual energy bills by over £680,000.

Improvements will also be made to a number of council-run leisure centres, libraries, community centres and offices. In total, 37 non-school buildings will benefit from the programme, including De Montfort Hall which will see its stage and auditorium lighting replaced with energy efficient LEDs. Most buildings will also see the installation of solar PV panels to help generate low-cost renewable energy.

It is estimated that the overall programme could see over 2,800 new solar PV panels installed in total, enough to cover over 4,600sqm or all 18 championship courts at Wimbledon.

The new panels will help generate over 1.7million kWh of green energy per year.

Deputy City Mayor Cllr Adam Clarke, who leads on environment and transportation, said: “We are acutely aware that the need to retrofit existing buildings is amongst the biggest challenges presented by the climate emergency. This new funding will be a massive boost to the city’s ambitious aims to become carbon neutral in by 2030 or sooner.

Through a major programme of investment in our buildings, we will help dramatically cut carbon emissions. In doing so, we will also help to save hundreds of thousands of pounds each year in energy costs – something that’s very welcome in these extraordinarily challenging times.

“Alongside our £80million investment in sustainable transport to support the city’s growth and work already underway on the £13.5milllion carbon neutral St Margaret’s bus station, this new investment represents another huge step forward in our citywide response to the climate emergency.

“It is vital that we maintain this momentum and continue to work with local partners and central Government to deliver on our ambitious vision for Leicester.”

Cutting the carbon footprint of the city’s buildings is a key action resulting from the first Leicester Climate Emergency Strategy. The new strategy sets out an ambitious vision for how the city needs to change to move towards becoming carbon-neutral and adapting to the effects of global heating by 2030, or sooner.

An accompanying action plan – which will be updated on a yearly basis – sets out an initial programme of 120 actions that will support the strategy and help achieve the ambitious carbon savings required.