Works begins on next phase of house building at Ashton Green 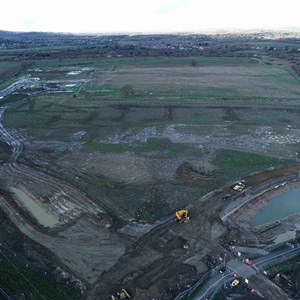 WORK has started on a second phase of house building at a landmark regeneration site in the north of Leicester.

Leicester City Council has contracted Kier Living to lead development on the next parcel of housing development at Ashton Green – a major project to create a community of up to 3,000 much-needed new homes, along with community and health facilities, employment land and retail.

Kier Living will deliver 307 family homes, including affordable housing, on a 37-acre site off Bevan Road, on the eastern edge of the scheme between Beaumont Leys and Thurcaston.

It will include a range high-quality two to five-bedroomed properties, designed to meet the environmental standards of required for Ashton Green as a sustainable development. It will also include around 13 acres of open space, sustainable drainage solutions and protected wildlife corridors.

Work will initially involve around eight weeks of preparatory and access works to create temporary access to the site from Bevan Road and Churchbell Way. Construction of the first homes is expected to begin by mid-spring and Kier hopes to be able to market the new homes for sale from Summer 2021.

Kier Living’s involvement is a major milestone for the Ashton Green development and follows the completion of the first phase of house building, which saw 101 new properties built by Morris Homes.

Alongside this, work on a major £10million highway infrastructure scheme to unlock further development land at Ashton Green is progressing well. This follows a successful bid by the city Council for a share of the government’s Housing Infrastructure Fund, which aims to help unlock potential for new housing development.

The highways work – which is being carried out by Galliford Try under contract to the city council – is due to be complete by autumn 2021 and will open up access to three further parcels of land for future housing development.

City Mayor Peter Soulsby said: “Ashton Green is an essential part of the city’s commitment to building the 30,000 new homes needed in Leicester over the next ten to fifteen years, and it will make huge contribution to local economic growth.

“I am very proud that this hugely ambitious project has reached another major milestone with work now beginning on a new phase of work to build over 300 new homes. We are excited to have Kier Living onboard to deliver this exciting development.”

Darren Humphreys, regional director for Kier Living Central, comments: “We are delighted to have been contracted to deliver the second phase of development at Ashton Green. We look forward to contributing to this exciting new community and deliver more high quality, sustainable housing for the local area.”

Leicester City Council is the principal landowner and promoter of the Ashton Green development, which is a mixed-use urban extension on a 320-acre greenfield site to the north of Leicester.

Up to 30 per cent of the new homes to be built at Ashton Green will be affordable homes for rent and for shared ownership, with around a third of the third retained as green space.