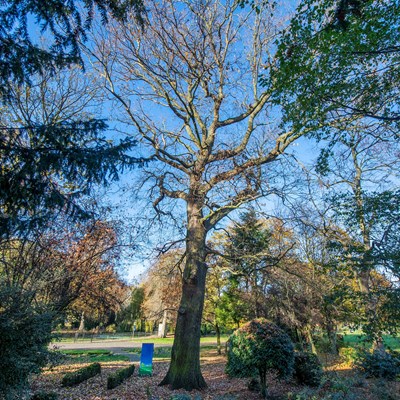 A TRIO of trees, chosen for their red, white and blue foliage, will be planted in Leicester’s Abbey Park to mark the Queen’s Platinum Jubilee in 2022.

The city council will plant the trees on Sunday (5 December) as part of a project called The Queen’s Green Canopy – a nationwide campaign to encourage people to ‘plant a tree for the Jubilee’.

Leicester’s commitment to planting trees has led to its selection as a ‘Queen’s Green Canopy Champion City’, and a plaque will be installed close to the new trees to acknowledge the city’s role in supporting next year’s Jubilee celebrations.

The trees themselves – a red-leafed acer, a white poplar and a blue-leafed eucalyptus – will be a fitting tribute to the Queen’s 70 years of service to the nation.

Cllr Piara Singh Clair, deputy city mayor responsible for parks, said: “In around 20 years’ time, when these three trees will be semi-mature, we hope that their canopies will merge to create a vision of red, white and blue.

“I would encourage everyone in the city to join in with the project by planting a tree in their garden, growing an oak from an acorn in a flower pot, or planting trees at their schools or place of work. There’s lot of information on the Queen’s Green Canopy website – and there’s plenty of time to get involved before the tree planting season ends in March.”

“Trees are not only beautiful to look at, but they support wildlife, provide cleaner air, reduce pollution levels and mitigate the effects of climate change – and we’re very proud to have been designated a Queen’s Green Canopy Champion City for our commitment to tree-planting.

“Let’s all get involved and support this brilliant project. From as little as £10, you can celebrate the Jubilee by gifting a tree that will benefit the nation for generations to come.”

The three new trees will be planted close together in Abbey Park as part of a family event during National Tree Week on Sunday 5 December.

As well as the tree planting ceremony, there will be nature-themed craft activities with The Spark Arts for Children, wood sculpting demonstrations, and free tea and coffee for visitors to the event, which will run from 11am to 1pm.

The city council will also give away 1,000 small trees – or ‘whips’ – at the event, to encourage local families to plant a tree for the Jubilee. Instructions on how to plant and care for the new trees will also be provided.

Last month, children from Alderman Richard Hallam Primary School in Leicester were the proud recipients of a maple tree, gifted to them by Her Majesty The Queen.

The school was one of 69 across the country to receive a tree from The Queen. Together with a tree planted at Windsor Castle to launch the Queen’s Green Canopy Project, the 70 trees represent Her Majesty’s 70 years on the throne.

For more information about the Queen’s Green Canopy project, go to queensgreencanopy.org

National Tree Week runs from 27 November to 5 December and marks the start of the winter tree-planting season. This season, Leicester City Council plans to plant more than 7,500 trees, supported by its volunteer tree wardens and dozens of community volunteers.

Picture caption: This oak tree was planted by the then Prince and Princess of Wales in 1882 to mark the formal opening of Leicester’s Abbey Park. The oak tree will be 140 years old during The Queen's Platinum Jubilee year in 2022. Photo credit: Ian Davis