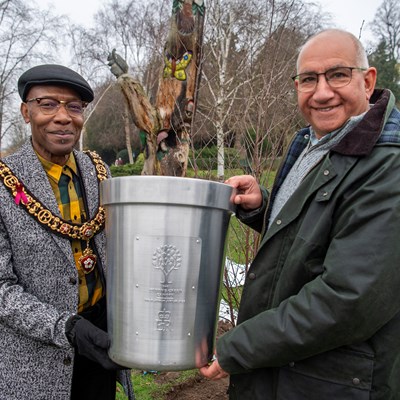 A TREE that formed part of a royal sculpture earlier this year is getting a new home in Leicester’s Abbey Park.

As part of the celebrations for Her Majesty the Queen’s Platinum Jubilee in June, a huge 69ft-tall tree sculpture – called the Tree of Trees - stood outside Buckingham Palace as a message of hope, regeneration and optimism to the nation.

The sculpture took the form of a giant tree made up of 350 smaller saplings. Now, those saplings are being sent all over the country to be planted as part of the Queen’s Green Canopy campaign, which helps communities to plant trees.

The silver birch sapling was planted at Abbey Park on 1 December by the Lord-Lieutenant of Leicestershire, Mike Kapur OBE, at a ceremony attended by local city councillors and the Lord Mayor of Leicester, Cllr George Cole.

It has been planted close to the bowling green in the park, near to the place where a trio of trees chosen for their red, white and blue foliage were planted last year, in readiness for the Jubilee.

Lord Mayor of Leicester Cllr George Cole said: “It’s an honour to bring this tree to Abbey Park as a way of remembering HM Queen Elizabeth II and the wonderful celebrations that were held for her Platinum Jubilee. As well as being a lasting legacy to the Queen, this tree is a symbol of hope and optimism for the people of Leicester.”

Lord-Lieutenant of Leicestershire, Mike Kapur OBE, said: “Following on from being recognised as a Queen’s Green Canopy Champion City, today we celebrate as Abbey Park becomes part of Her late Majesty’s lasting legacy – The Queen’s Green Canopy Tree of Trees. I felt that Abbey Park was a deserving recipient of one of these saplings as it is held so closely in the hearts of people across the city and county. It is my hope that this tree will become a place for reflection and peace for all who visit the park.”

The planting also helped to mark National Tree Week, which this year takes place from 26 November to 4 December and marks the start of the winter tree-planting season. This year, the city council plans to plant more than 7,000 new trees in Leicester’s parks and open spaces, on roadside verges, on school sites and on housing land.

The city council has also launched an online tree trail to mark National Tree Week, featuring photographs and detailed descriptions of 21 of Abbey Park’s trees, as well as an interactive map that will help visitors to locate them all.

An update of Leicester’s five-year Tree Strategy, which reviews progress made during 2021-22, can be found at www.leicester.gov.uk/content/tree-strategy-21-22/.The review notes that the city council planted 19 new trees for every tree lost in 2021/22, and planted a total of 11,753 trees.