Council fears it could lose thousands of trees to ash dieback 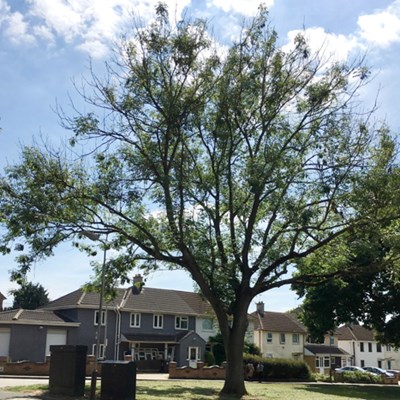 THOUSANDS of ash trees may have to be felled in Leicester over the next 10 years as a result of a disease that has killed millions of trees across Europe.

Ash dieback – which was first detected in the UK in 2012 – will decimate the country’s ash population, with 75–95% of the UK’s ash trees expected to be lost to the disease in the next 20 to 30 years.

Although relatively slow in reaching the East Midlands, the fungal disease has now taken hold in Leicester ­ – and the council’s trees & woodlands team will soon begin the task of removing a significant number of dying ash trees that are so badly affected that they represent a serious risk to the public.

A recent inspection of the trees at Gorse Hill Spinney off Anstey Lane established that around 250 ash trees were in such poor condition that they represented an imminent risk to public safety, having already lost more than 50% of their canopy to the disease.

The city council will begin work to remove the trees next week.

“As the ash dieback fungus infects the tree, its branches gradually ‘die back’, become brittle and break apart – with falling branches representing a significant risk to the public.

“We’re systematically monitoring the 25,120 ash trees in our ownership but there’s nothing we can do to stop the disease from spreading, other than by removing infected and dangerous trees.

“Over the coming months and years, my team – like everyone else who’s responsible for ash trees across Europe and the UK – will have the heart-breaking task of felling hundreds of ash trees that have succumbed to this disease.

“The impact of ash dieback will be devastating, particularly here in Leicester, where ash trees are so common.”

Cllr Adam Clarke, deputy city mayor for the environment, said: “Tragically, ash dieback will cause even greater damage to the nation’s landscape than the outbreak of Dutch elm disease in the 1960s and 70s – and it won’t be easy to prepare ourselves for the loss of so many trees.

“Like councils all over the country, we’re now facing the prospect of having to deal with a virulent disease that has already killed millions of ash trees around Europe and will have a devastating impact on our woodlands, roadsides and open spaces.

“Our priority will be to remove the infected ash trees whose brittle branches represent the greatest risk to public safety – and this will require significant resources in the short to medium-term.

“Once that risk has been dealt with, we’ll be committed to developing a long-term recovery plan that will help restore our landscape – and ensure that Leicester’s urban forest continues to be a major asset for generations to come.”

The city council’s Ash Dieback Action Plan will be published later this year.

Ash dieback arrived in Europe from Asia in the 1990s and rapidly spread, devastating the European ash that had no natural defence against it. The fungus releases spores that can be blown tens of miles away, penetrating a tree’s leaves and eventually blocking its water transport systems and killing it.

Ash dieback can affect ash trees of all ages. Younger trees will succumb to the disease more quickly but, in general, an affected tree will show symptoms including discoloured leaves, diamond-shaped lesions where its branches meet its trunk, and the characteristic ‘dieback’ that leaves the tree with a severely reduced canopy.

In Britain, ash is the second most abundant tree species in small woodland patches after the native oak, the third most abundant in larger areas of forest, and the most common hedgerow tree species. Ash dieback will therefore have a devastating impact on the British landscape and the biodiversity of the nation’s woodlands.