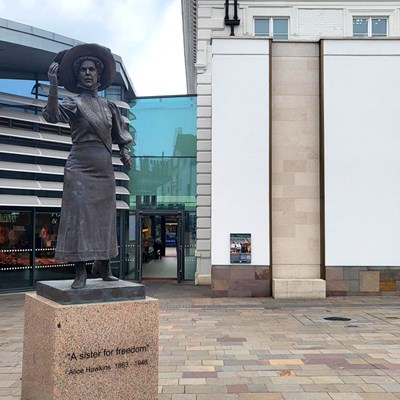 STORIES associated with Leicester Market’s past are being brought to life, thanks to a brand new app that’s free to download.

The Picturing the Past app uses augmented reality to allow people to explore three historic stories linked to the area around the market.

Using the app, people will be able to scan three information panels in Green Dragon Square to uncover stories about the influence of the Romans on Leicester, a fatal shooting at a medieval pub that gave the modern square its name, and the inspirational suffragette who’s now commemorated with a statue in the square.

Developed as a collaboration between Leicester-based arts and technology company MBD and Leicester City Council, the app uses audio and images to help bring the stories to life.

City Mayor Peter Soulsby said: “Picturing the Past builds on the interest in local history that’s been generated by our popular Story of Leicester heritage panels, which now highlight more than 175 historic sites in Leicester.

“By making these stories accessible to people via their smartphones, I hope we can encourage residents and visitors to discover more about the city’s long and fascinating past.”

Leicester-based MBD specialises in telling heritage stories through the use of new technology. Creative director Paul Long said: "We are really pleased to work with the city council to bring these stories to life through new technology.

“We are passionate about the city we work in, and we are excited for audiences to find out more about the stories that have shaped the place we live."

The Picturing the Past panel on Roman Leicester is near the Cherry Orchard mosaic next to the historic Old Fish Market, the tale of the murder at the Green Dragon Inn in 1778, and the controversial pardoning of the perpetrator, is linked to a panel near The Jetty, while Alice Hawkins’ story can be found on a panel next to the suffragette’s statue in Green Dragon Square (pictured).

The Picturing the Past app can be downloaded free of charge from Google Play and the App Store. A compatible smartphone or tablet is required.

More information can be found at storyofleicester.info/picturingthepast