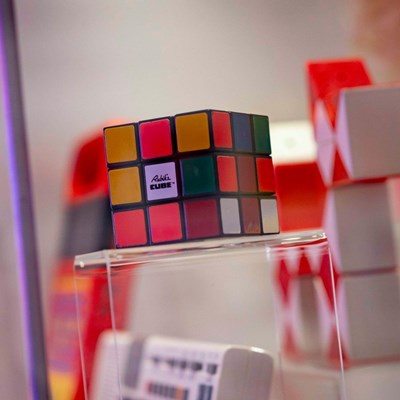 SHELLSUITS, leg warmers, boomboxes and Peanut Treets are some of the items that will be fondly remembered in a new exhibition at Leicester Museum & Art Gallery from Saturday (14 May).

I Grew Up 80s will celebrate the decade when music was on cassettes, newsagents sold sweet cigarettes, and everyone had a Rubik’s Cube for Christmas.

Memorabilia from the 1980s will include beautifully-preserved examples of the decade’s toys, technology, sport, fashion, food, film, books and TV.

All of the items on display belong to the collector and cultural commentator Matt Fox, who has explored his 1980s childhood to create the exhibition and showcase the best of the decade.

Matt – who was also the collector-producer for Leicester Museum’s record-breaking Star Wars-themed May The Toys Be With You in 2018 – is excited to bring the exhibition to Leicester as part of its UK tour.

“I hope the exhibition will have mums and dads sharing memories and stories with their kids,” said Matt – who was eight in 1980.

“Those of us who grew up 30-40 years ago, pre-internet, can genuinely state that life was very different then. We roamed out on our bikes, away from our parents and without the umbilical cord of mobile phones. In cinemas, Star Wars had ushered in a new era of special FX movies, music was a feelgood riot of colour and sound, and games consoles and home computers had transformed the humble telly into a host of imaginary worlds

“This collection is a nostalgic look back at objects that many people either owned, or perhaps desperately wanted to own, and I hope you’ll enjoy it.”

Deputy city mayor Cllr Piara Singh Clair said: “This exhibition will be a nostalgic trip down memory lane for anyone over 40, but the fascinating items on display are sure to appeal to children and young people too.

“We’re delighted to have I Grew Up 80s as our summer exhibition this year, and hope that it proves to be as popular as the Star Wars-themed show that Matt brought to Leicester four years ago.”

I Grew Up 80s opens at Leicester Museum & Art Gallery on Saturday (14 May) and continues until Monday 29 August.