FINAL touches are being made ahead of a spectacular two-day free family festival in Leicester city centre this weekend.

A centrepiece of the festival will be the UK’s largest puppet – Storm, a folklore giant towering 10 metres high – while will follow a route through the city centre each day, taking in street performances and music at stops along the way.

On Saturday, August 27, Storm’s journey begins at Town Hall Square at 12noon, travelling to Green Dragon Square to watch over dance performances, and to Loseby Lane where the Red Leicester Choir will sing to greet Storm as she winds through the lanes to Silver Street.

From there she will travel to the Clock Tower where she will be met with sizzling samba rhythms from Leicester’s Sambando at 2.30pm, before a climactic performance by dancers from Studio 79 to mark the end of Storm’s journey at Jubilee Square at 3.55pm.

On Sunday Storm’s route will see the colossus travelling from The Circle outside the Mattioli Woods Building in Welford Place, accompanied by the thunderous Japanese drumming of Leicester Taiko at 12noon.

Indian dance company Nupur Arts will lead Storm to a finale at the Clock Tower at 1.15pm, with a parade of ocean friends, showcasing Indian Classical, Bollywood and Indian Folk dance. From there she will travel along Cheapside reaching Town Hall Square at around 2.45pm.

Throughout the Saturday and Sunday, there will also be a packed programme of interactive play, exploration and discovery. 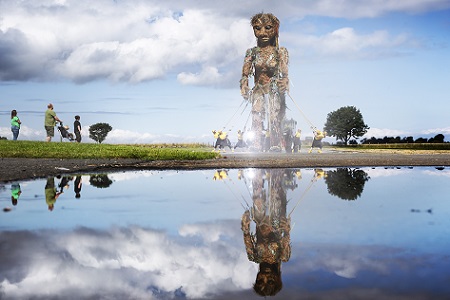 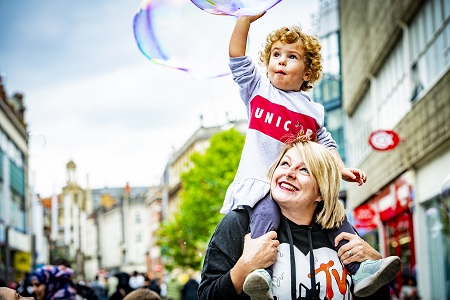 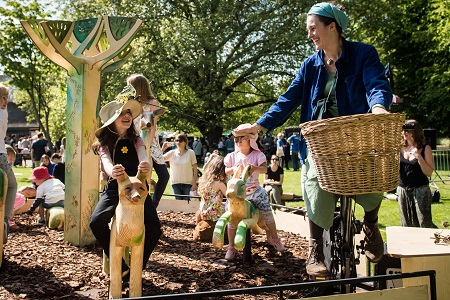 From 12noon till 5pm on Saturday, Jubilee Square will host activities including Plankton by Enter Edem, where visitors can explore the micro-beauty of the oceans with interactive puppetry workshops, bringing the story of this unseen world to life.

The Bees offers an engaging installation of multi-sensory hives, each hiding a unique, unexpected interior world. It takes place at 12noon, 2pm and 4pm, while Focus offers free art activities and games, including designing a banner, making a green pledge and joining in with family games.

Humberstone Gate will host The Whale, where visitors can step inside a giant silver whale to experience a fun, immersive mini show for intrepid sailors of all ages, in a relaxed, family-friendly and ramp-accessible way. The Whale will be open from 11am till 1.30pm, and 2.30pm to 5pm.

Ocho the ground-breaking inflatable octopus will also be strutting its stuff, curling and swaying its way through the city’s streets at 12.30pm, 3pm and 4.30pm.

A spectacular fusion of water, dance and song will kick-off Sunday’s programme of events, when Mayfly brings the stage to life with with water effects and leaping fountain at the Clock Tower, from 12noon.

Mayfly also offers an interactive workshop after the first performance, to learn more from those involved in the creation, as well as a touch tour for visitors with visual impairments, which can be booked by contacting festivals@leicester.gov.uk

Elsewhere, the Bewonderment Machine, in High Street at 12noon, 2pm and 4pm, creates a miniature theatrical flight of the imagination, combining puppetry, machinery, hand-carved wooden animals and music on a cycle-powered carousel, while a Sweep of Swallows paints the city skies with colour, movement, and the sweet sound of birdsong.

Open Streets at Town Hall Square, Green Dragon Square and Church Gate will showcase Cyclone Works’ crazy bikes, offer rickshaw rides, and a chance to try out an adapted bike or grab a ride on a Santander Cycles Leicester e-bike. There will also be guided walks and led rides, fix-it sessions from Dr Bike, and an extreme mountain biking display. Open Streets runs from 1pm to 4pm.

Leicester City Mayor Peter Soulsby said: “With the summer holidays drawing to a close, the City Festival once again has packed programme of family-friendly fun in the heart of the city, which is all completely free.

“There promises to be a wonderful programme of events and activities, and I look forward to the city centre coming alive this weekend.”

City Festival is the climax of Leicester’s Summer in the City season of events, which has also included the The World Reimagined, Caribbean Carnival, National Play Day, Journeys Festival, Belgrave Mela and the City Beach.

More details, including a daily map of Storm’s route through the city, are available here.