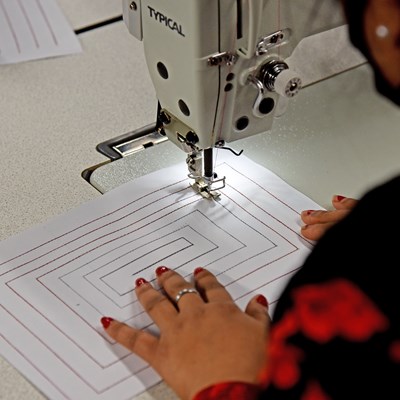 THE CITY council has welcomed the creation of a new textile manufacturers’ federation.

The newly-formed Apparel & Textile Manufacturers Federation (ATMF) was formally launched at the Houses of Parliament on Monday 18th July. Founded to revive the historical trade of textile and garment manufacturing in Leicester, and with the aim of building a more ethical and sustainable textiles sector, the ATMF will act as a voice for suppliers.

It aims to support the garment supply chain with compliance, auditing and the safeguarding of jobs through collaborative partnerships.

Sajjad Khan, founder of ATMF, said: “We are delighted that the UK Government is recognising our efforts in Leicester and further afield, to support textile and apparel manufacturers. It is a great honour to have been given the opportunity to launch the Federation at the House of Commons, and this only adds to the gravitas of our mission.”

He continued: “We already have the backing of a large number of businesses from across the supply chain so we know there is a very real need to create a strong supplier voice. We have also drawn support locally from senior level organisations including Leicester City Council, De Montfort University and the Leicester and Leicestershire Enterprise Partnership. The ATMF aims to promote ‘Brand Leicester’ within the MADE IN UK umbrella.”

Shehzad Valli, a Member of ATMF and a Leicester garment manufacturer, added: “The launch of the ATMF marks a significant milestone in the revitalisation of the textiles sector in Leicester. We want the city to be at the forefront of national gains for the industry, and we’re determined to make that happen. We are now calling on the UK Government, national and international bodies, and major brands to support our efforts.”

Leicester’s deputy city mayor for Leicester, Cllr Adam Clarke, has led on innovative work to bring partners together in the city to help tackle problems in the garment industry. This has included the setting up of the Leicester Labour Market Partnership – after a meeting instigated by the city mayor in 2017 - the publication of an annual report to document progress, and investing £300,000 in a new fashion technology academy, run by Fashion-Enter, to increase skills and best practice. With funding from the UK Community Renewal Fund, the city council and partners Fashion-Enter and De Montfort University have also been delivering a co-ordinated support programme for textiles manufacturers and local textiles workers.

"The mobilising of manufacturers as a meaningful voice for the textiles sector has been an aspiration for some time and is a huge step forward. I congratulate all those involved for stepping up and showing such leadership, particularly during these challenging times,” Cllr Clarke said.

“Leicester's strong heritage in garment manufacturing puts the city in a great position to lead a resurgence in the industry - but this can only be done ethically by working together.

The invitation to launch the federation at the Houses of Parliament follows a recent and successful meeting between federation members and Government representatives.

ATMF was formed with the help of worker rights' charity, Justice in Fashion.

ATMF is an independent, supplier-led trade association representing garment and textiles manufacturers in the UK. It represents a growing number of independent companies and, as a UK-registered Community Interest Company (CIC), it is able to collaborate and provide a voice for this important “second tier” of the UK garment industry supply chain.

ATMF’s ultimate mission is to address the needs and experiences of apparel and textile manufacturers across the UK, but initial efforts are focused on fixing the problems in Leicester that have created business and reputational damage to a once proud and thriving sector of the UK economy. ATMF was formed with the help of worker rights' charity, Justice in Fashion.

ATMF acts as a national trade body representing the collective commercial, legal, and ethical interests of its members.

ATMF supports suppliers in their steps needed to innovate and adapt in a rapidly-changing business environment.

ATMF represents the collective voice of manufacturers in forums and initiatives that promote fairer practices within the wider garment industry.

ATMF is working collaboratively with businesses, NGOs, government, academic, and worker groups to build the pathway for re-establishing Leicester as a safe and ethical global manufacturing hub.